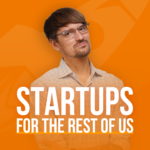 Startups For the Rest of Us
Episode 634 | Naming Your Startup, Tapping Out a Niche, and Licensing Your IP

In episode 634, join Rob Walling for another solo adventure where he answers listener questions on topics ranging from naming your startup to initial aha moments and how to know if you have tapped out a specific niche.

Rob Walling:
Bootstrapping cares if you can provide value to a group of businesses or individuals who are willing to pay for it. I view it as something that helped me improve my space in life, but also helped me achieve the freedom, purpose, and relationships that I had been seeking for so many years.
Welcome back to Startups For the Rest of Us. It’s another week, another episode. It’s great to be here with you. Thanks for joining me. I’m going to be diving into listener questions today. I don’t know if it’s the YouTube channel taking off, you should check that out, MicroConf.com/Youtube, or if it’s just our audience and our reach expanding through the podcast and other avenues, but I’m getting a lot of listener questions these days, which is great.
Last week I was in Atlanta for MicroConf Local where I sat down with Ben Chestnut, the co-founder of MailChimp, and did what we call a SaaS snapshot where I asked him questions about starting up, about exiting, things he’s learned in his 22 years as a SaaS entrepreneur, if you can believe it. But while I was there, I took a few minutes to do a little workshopping, customer development, as they say. It was just talking to a few of the founders who had shown up for that event.
I was asking folks about their opinions of specific Startups For the Rest of Us episode formats, ranging from we have interviews, sometimes I do founder hot seats, there’s the Hot Take Tuesdays, there are question and answers, there’s Rob Solo Adventures and all these things, and got some really helpful feedback from folks. What I heard is that the Rob Solo Adventures give people frameworks and thoughts to chew on, and that a lot of the questions wind up relating, even if they’re not specific to that founder or that founder’s niche, the specifics and the thought process of thinking them through is helpful.
It’s good to have questions coming through. As always, audio and video go to the top of the stack. A lot of these are video today and they really did jump the line. I think we have almost 20 text questions now. If you’re going to ask a question and you want it answered really in the next few months, to be honest, you’re going to want to send it as an audio or a video question. You can head to startupsfortherestofus.com, click ask a question in the top nav. I’ll dive into my first question in just a second. It’s getting close. MicroConf Europe in Malta is next week. If you don’t have a ticket, head to MicroConf.com/Europe and pick one up.
Hop on a plane. I’ll see you there. I’m so excited. It’s going to be amazing. Great speaker lineup. Of course, Malta, I’ve never been there and I’m really looking forward to it. With that, let’s dive in to our first listener question.

Matt Laskerback:
Hey, Rob, Matt Laskerback with Player Book. If you remember, I asked a question about building an expensive MVP for my gamification of youth playbooks for sports. We did go ahead and get the expensive MVP going, so we’re going to go ahead and have that in about a month. We’re about halfway done there. I did have a question now that I’m approaching marketing about that. We are at a crossroads with the naming, at least initially, of this product. The initial MVP is built around one position on the sports team that is the most complex and I think will hook the right people to being interested in going through our demo process and feedback loop process.
But in the end, the app is more for everyone on the team, and that might be phase two or phase three. Before we get to that point, we want to solve it for this one very complex position. And from there, we can kind of roll it out to the rest of the positions on the team. The question is, do we name at least for the first year or so while we’re getting the word out, do we name the product to that specific position, because I do think that will be an attention grabber for coaches, or do we name it, like I said, Player Book is my original name because it’s for the whole playbook and the entire team?
Marketing toward the initial batching of customers, which will be the hook initially, or to the eventual product, which will be the whole playbook. See? It’s in my head. Anyway, thanks a lot for everything you do for the community. Love to hear your feedback.

Rob Walling:
Thanks for the question, Matt. I do recall your question from a couple months ago. An answer to your question about naming it for the position that you’re going to start in, kind of naming it for a niche, and then land and expand. Personally, names are pretty hard to change. Names start getting tied to your branding. They start getting mentioned everywhere you go in terms of podcasts. You leave a trail of naming breadcrumbs all over the place. If you answer a question on Quora, if you write a blog post, if you get something quoted or published somewhere, it’s going to say Matt, who’s the founder of Player Book, or Matt, who’s the founder of XYZ Position Book, if you pick the XYZ Position.
Personally, I do not like changing names because it’s almost like a positioning pivot, a branding pivot. It’s pretty dramatic. I know some founders who have done it successfully when they realize that the name that they had chosen was not ideal in the space. One example of this is Ruben Gamez had a company called Docsketch that is now SignWell, and it’s an electronic signature app. At a certain point, there was confusion with Docsketch and people would say Docusketch. It was just becoming a headache and an issue that he saw was only going to get worse. He did go through a complete renaming and frankly, it was a lot of work.
It’s not just taking a domain and redirecting things, but it’s all the other work that goes on behind that. A lot of these questions have and it depends, but in this case, I feel pretty strongly about what I would do in your case, and that’s to go with Player Book.

Dylan Pierce:
Hi, Rob. I’m Dylan Pierce from Cleveland, Ohio, and I’m actually a short time listener. I really wish I would’ve found your podcast sooner. I’ve been doing devtrepreneur stuff on my own for about 10 years, and I feel like I could have accelerated my current growth if I would’ve found your podcast much sooner. I had to go through learning this various stages of app development and business development kind of on my own. My most recent attempt has actually been successful, but I’ve hit a plateau. I have an app on a very large e-commerce platform. The first year, it was doing pretty well. It was growing at a very solid fast rate, and lately, it’s plateaued.
I’m wondering if it’s possible to tell that you’ve tapped out a niche. My apps are a certain niche within this e-commerce platform, and I’m wondering if it’s time for me to try to address this niche in a different e-commerce platform with a different app that provides the same solution, or perhaps just add another solution to the existing e-commerce platform I’m familiar with, target it towards the same-ish audience, but with a slightly different solution. How would you determine that there’s no more customers available for you in a certain integration or platform? How would you handle overcoming this plateau and bring your business to the next level?
Keep up the great work. Love the content. It’s very easy listening and very approachable for someone who knows enough development experience to be dangerous and build their own apps and build a business without losing your mind and taking VC money, which is awesome. Great work.

Arvin:
Hey, Rob, love your show. My question is, I’ve been working on a SaaS that built automations in a CRM targeted towards dentist, and one of my dental clients wants to create his own marketing agency and sell his own CRM. He asked me if he can pay me for the IP. He’s going to do it anyways, create the CRM. He wants to pay me for the automations that I’ve created and the workflows, et cetera. One, how do you value your time considering that I started this four years ago? I started off in Excel and now I’ve looked at different platforms like ActiveCampaign and HubSpot to white label. That’s what I’m basically doing, I’m white labeling that solution and selling it.
The question is one, how would you value your time if you have a client that is going to be competing in the same space? I’m essentially a marketing agency and selling a CRM solution. I’m trying to focus more on the technology side of things and just sell like the CRM solution piece of it and if that’s a good idea at all to sell some of that. It’s constantly evolving. But I think as a form of mutual respect, he wants to give me something for that. I’m not sure what that dollar number is and how to value it. I also understand that the only person I can value my time is me. But any guidance or things to think about would be helpful. Thanks.